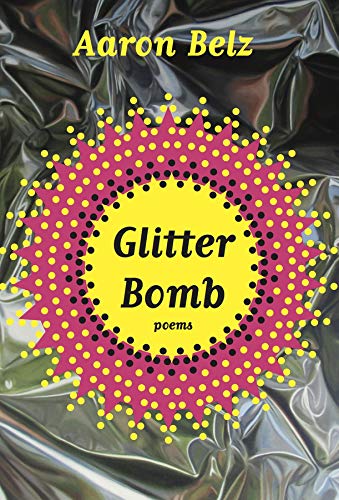 The poetry of Aaron Belz.

I would like to commend myself for not beginning this review with "Aaron Belz is da bomb." And I think you, reader, should commend yourself for reading this review that doesn't begin that way, and me for writing it, because the probability that you will purchase Aaron Belz's new book is now much higher than it would have been if you had continued in your ignorance of Aaron Belz and his new book, assuming that you were in fact ignorant of him and it before you started reading this review, which it is perhaps presumptuous of me to assume, in which case I apologize. But my larger thesis remains, and it is that Aaron Belz is da bomb, notwithstanding my reluctance to begin this review by saying so.

Belz makes me want to be a little silly, as you might have noticed. This is a poet who will write, in a poem entitled "Trois Poésies Antique," "Watch out for the wack kings, / clanking their armor, / riding their dope horsies over the hill." Sound advice, perhaps, but a bit lacking in the Eliotic touch. Belz has that sweet silliness with which late Ashbery, James Tate, and their wise-guy epigones have saturated the marketplace:

When I say
"I dig graves"
what I mean is
I enjoy and/or
understand them.

That's "Hippie Slang," in its entirety. The poem-as-corny-joke is a particular forte of Belz's: "I scream, you scream, we all scream / when we get stabbed in the heart."

But if Belz's aesthetic is familiar, he works it with the new-minted sheen of a sexting mallrat in bubblegum lip gloss. He rarely settles for cutesy or zanier-than-thou contortions (although I want the ten seconds I spent reading "On the Loss of a Finger" back). "Violets, Time and Motherhood" improbably begins, "One night I lay musing, among violets." The tone, after dozens of goofball pages, is impossible to mistake, and the succeeding lines grow purpler until they're practically winking at the reader. And yet the poem achieves a poignant dissonance: "One night I lay awake in a music of voices. / It all came to me suddenly, and so I ran / far from the madness, and into a field."

Like Ashbery, Belz makes comedy out of "what Wyatt and Surrey left around, / Took up and put down again / Like so much gorgeous raw material," mixing registers not (or not only) in order to mock or ironize, but with something like wistfulness:

Like, I might be driving along, and the
iPod might shuffle to that one Coldplay song:
why now? Here, where the road
gracefully descends to Steak 'n Shake,
where the trail ends

The second sentence begins with a traditional lyric deictic placement: think of Keats—"Here, where men sit and hear each other groan"; of Ammons—"here / where we can watch / the closing up of day." It descends into the vulgar poetry of consumerism, then resumes its contemplative register, confident in its accommodation of the jingly present.

This is a common enough tactic in contemporary smart-ass lyric poetry, but Belz is better at it than most wack kings. A poem that's mostly concerned to joke around about "the other stuff I'm picking / well enough on my own, such as my nose," suddenly digresses to observe a racehorse who "faltered in the muddy stretch, coat full of foam." As in Ashbery's work, the high style of that line is part of the joke, which doesn't mean it's not admirable writing. To an extent, the point is to question such distinctions.

Which brings us to Belz's "My Last Duchess":

That's my last duchess painted on the wall,
Looking as if she were alive. She's not.
She was too flirtatious, so I had her killed.
Now I want to marry your master's daughter.

As a joke—literalizing what in Browning's original is all indirection—it's not much (a poet friend of mine thinks it banal for this reason). But I read it as a weary commentary on the teaching of literature, Belz's sometime profession and my own. Inevitably, Browning's poem, like Hemingway's "Hills Like White Elephants," gets reduced to an object lesson in subtext, as if literary works were riddles for students to puzzle out. Browning's superb rhetorical control and social satire go missing. Belz's flat lines reveal how little the "message" of a poem matters.

It's perhaps ironic to discover such subtextual contraband in Belz's parody, but he's sneaky that way. To say he isn't "merely" a comic poet implies that there's something wrong with being a comic poet. I don't believe that, and Belz is one of the best comic poets we have. But even his silliest poems can break—with panache—into anxiety, heartbreak, longing, loss. "There's no I in team," he writes, "but there's one in bitterness / and one in failure." Glitter Bomb glitters with inanity, but keep an eye out for unattended baggage. Watch out for the wack kings.

Michael Robbins is the author of two collections of poetry: Alien vs. Predator (Penguin) and The Second Sex (just published by Penguin). He teaches creative writing at Montclair State University.