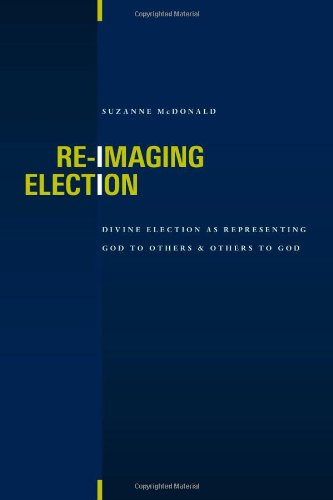 Re-Imaging Election: Divine Election as Representing God to Others & Others to God
Suzanne McDonald
Eerdmans, 2010
240 pp., 26.0

Rethinking the doctrine of election.

Putting the finishing touches on the second volume of his Church Dogmatics, the volume in which he took up the doctrine of God and with it the doctrine of election, the great 20th-century Swiss theologian Karl Barth wrote: "To think of the contents of this volume gives me much pleasure, but even greater anxiety." Apart from his desire to hew closely to God's own self-testimony in Scripture, Barth feared the repercussions of doctrinal revisionism. In this volume, more than in the previous one, he confessed, "I have had to leave the framework of theological tradition." Candidly, he went on, "I would have preferred to follow Calvin's doctrine of predestination much more closely, instead of departing from it so radically. But I could not and cannot do so. As I let the Bible itself speak to me on these matters, as I meditated on what I seemed to hear, I was driven irresistibly to reconstruction."

These words of Barth came to mind again recently as I read a treatment of the same themes in a revised doctoral dissertation, Re-Imaging Election: Divine Election as Representing God to Others and Others to God by Suzanne McDonald, now an assistant professor of systematic and historical theology at Calvin College. Like Barth, McDonald does her theological work from within the Reformed wing of the Christian faith. Also like Barth, she employs fresh readings of biblical texts in an effort to reform the classic Reformed doctrine of divine election. And her thesis, like Barth's reconstruction, is elegantly simple: God chooses a portion of humanity for a twofold purpose—first, to be God's representatives to the rest of humanity, and second, to hold those same people, the "rest," within the sphere of God's promised blessing, thus representing them to God.

God's people are chosen, McDonald says, for the sake of furthering God's purposes of blessing "'beyond' the elect community itself."

Her book starts off with a fine exposition of the 17th-century divine John Owen's doctrine of election. Tapping into the current revival of interest in Owen's work, McDonald presents him as a champion of rigorous Calvinism, including what she terms the doctrine of "individual double predestination" (the belief that God unconditionally, without regard to foreseen merit or demerit, selects some of humanity as the objects of mercy and consigns the rest to eternal punishment). But, for McDonald, the chief virtue of Owen's account of this strand of the Reformed tradition is its robustly Trinitarian shape. Affirming the pactum salutis—the determination between the Father and Son to accomplish the work of redemption—Owen draws on a theology of the Holy Spirit as the vinculum amoris, the love binding Father and Son together, in order to explicate how the elect come to participate in the salvation Father and Son have achieved for them. Since God's triune being and his act "outside of himself," ad extra, for us, are united, Owen argues that it is impossible to apportion God's action of election to the Father or Son only. The Spirit, too, plays a part as the one who enables persons to become the beneficiaries in time of God's eternal choice that they should be those beneficiaries.

This affirmation leads McDonald—seamlessly—into an engagement with Barth's doctrine of election. (I'm not aware of any clearer summary of Barth's position on the matter, and that by itself ensures McDonald's book a place on my shelf within easy reach.) Unsatisfied with "individual double predestination" (Barth thought its whimsical nature undercut the one thing it was trying to do—give us the assurance that we have to do with a God who loves), Barth retooled the doctrine of election, with a recognizably Reformed touch, as articulating God's choice of God to be the one who is with us in Jesus Christ. The "terrible decree" of damnation? God appointed that for himself, suffering and exhausting its horror in Christ. The choice of some for salvation? No longer should the object of that choice be thought of as a finite number of humans plucked from the mass of the damned. Rather, again, God chose God—or, more precisely, God determined himself in the person of the God-man, Jesus Christ—to be the elect one, for the sake of all humanity. Jesus embodies God's decision to turn toward us, with our salvation and not our destruction in mind.

McDonald rightly plies this reworking of the Reformed teaching on election with several probing questions. In the first place, she wonders where the biblical evidence lies for seeing all of humanity as elect in Christ. Isn't election something particular, albeit with wider—even universal—effects? Furthermore, she gauges accurately the way in which Owen's emphasis on the Spirit as the agent of election's actualization has largely dropped off the radar in Barth's account. By focusing so much on Jesus Christ as God's self-determination to be God-with-us and God-for-us, Barth leaves little left for the Spirit to do. Divine election, apparently, doesn't need the Spirit, given how all-encompassing Christ's work has become in Barth's doctrine.