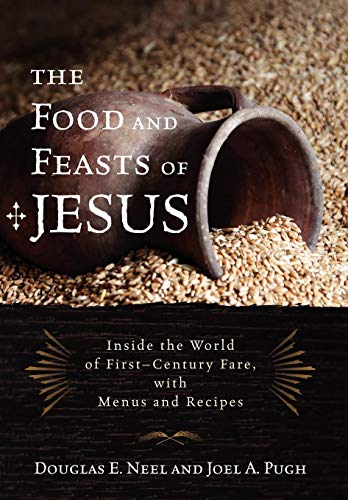 The Food and Feasts of Jesus: Inside the World of First Century Fare, with Menus and Recipes (Volume 2) (Religion in the Modern World, 2)
Joel A. Pugh; Douglas E. Neel
Rowman & Littlefield Publishers, 2012
272 pp., 59.00

With menus and recipes.

Not long ago, I moved with my family to Malawi, one of the poorest countries in the world where, every day, everyone eats a doughy cornmeal paste, nsima. They'll dip it in simple vegetable sauces for ordinary times and eat it with meat stews for special occasions, but whatever is or is not served alongside, nsima itself is the staff of life. "If you don't have nsima," a subsistence farmer told me, "you don't have life." Indeed, when the corn crop fails, as it occasionally does, hunger is severe and widespread.

It wasn't until he said this that I realized how little meaning Jesus' words "I am the bread of life" had for me—and probably for most of us in the West, where a lack of bread does not immediately portend imminent death. For 1st-century Middle Easterners—and, interpreting "bread" loosely, for many people in the world today—death is exactly what a lack of the starchy staple means. Conversely, abundant bread (enough to feed five thousand?) and storehouses full of grain mean life, and life to the fullest.

In The Food and Feasts of Jesus, Douglas E. Neel and Joel A. Pugh endeavor to introduce the contemporary reader to the food culture of the 1st century: a near-impossible task if one expects meticulous re-creations of recipes or menus. Foods change drastically over the course of mere decades, let alone millennia. Rice and tomatoes, for example, which we now regard as essential to Middle Eastern cuisine, were unknown in that region in the 1st century, coming, as they eventually did, from farther East and from the Americas, respectively; they do not appear in these recipes. But perhaps because they acknowledge the impossibility of perfectly achieving their aim, Neel and Pugh's project succeeds. It's possible to grasp the outlines of the food culture taken for granted by Jesus and his contemporaries; by preparing some meals in that style, we can get at least a taste of what food meant in that time and place.

And a richer understanding of food in the ancient Middle East can help us understand the Scriptures better; for example, the Gospels, especially Luke, are full of meals redolent with symbolic importance. To understand even a bit more about the food culture in which Jesus broke bread is to understand Jesus himself just a bit more, beginning with that strange claim we Christians remember each time we celebrate the Eucharist: I am the bread of life. When these words conjure a white Wonder-branded loaf or a crisp Parisian baguette or the thought of too many carbohydrates, we misunderstand: "For rich and poor alike, bread was the heart of the first-century Mediterranean diet. It was made every day. It was eaten at every meal …. Bread was what people ate to live …. When the bread was gone, everything was gone."

Bread was more than just what people ate; it defined their way of life, from the yearly sowing and harvesting to the occasional milling and trading and the daily mixing and baking. By introducing readers to the significance of bread in the 1st century, the authors give us the background to be able to understand the significance of bread as a symbol in the Old Testament as well as the New, and they do even more—they teach us to disrupt our culture's habits of eating prepared foods quickly and alone, to slow down and ponder our food and what food meant (and means) for people living in an agricultural society, and to make bread and eat it as Jesus and his friends would have, with our hands and as a utensil to scoop up whatever sauces are being served alongside, much as my Malawian friends eat their starchy staple, nsima.

A major strength of the book is that the authors have, in their study of biblical foods and feasts, retained a strong sense of what those foods and feasts are about. Yes, like the authors of other books on "what Jesus ate," Neel and Pugh tout the benefits of the Mediterranean diet, but unlike many of their counterparts, they grasp that the relative healthfulness of one foodstuff or the other is rarely in view in ancient writings. Instead, food is symbolic of God's grace, provision, and love; feasts, of God's generous welcome to all sorts of people. And for God's people in an agricultural society, responsibility and care for those less fortunate took the form of visibly, tangibly sharing the food that was the result of whole seasons of work.

Most of the recipes in this book are simple enough for the home cook, and are likely to appeal even to eaters who are only slightly adventurous. Of course, most of the meals re-created here are probably more like meals enjoyed by the wealthy on a good day than what sufficed for ordinary folks on ordinary days. Still, the authors' invitation to "join the feast" is a nuanced and thoughtful one, aimed at separating the reader from "our fast-food culture" and rediscovering the pleasure of creating entire delicious meals from scratch, inviting others to share, remembering those who do not have enough, and, in every bite, relishing the goodness and generosity of God, without whose sustaining hand there is no bread, no nsima, no life.

Rachel Marie Stone is the author of Eat with Joy: Redeeming God's Gift of Food, just published by InterVarsity Press.