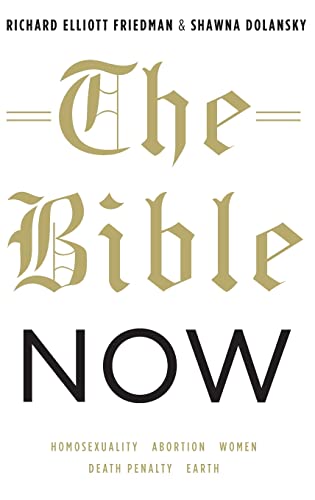 In The Bible Now, Richard Elliot Friedman and Shawna Dolansky set out to clarify "what the Bible has to say about major issues of our time." They believe that on a range of "controversial matters: homosexuality, abortion, women's status, capital punishment, and the earth," appeals to biblical authority are routinely based on misreadings and misunderstandings. Moreover, they say, these distortions are not limited to one side on this or that issue. What's needed, then, is the bright light of "critical biblical scholarship." At the same time, Friedman and Dolansky say in their preface, they seek to address

orthodox and fundamentalist readers with courtesy and respect. And as long as we keep to the facts and to honest method, what we have to share from our research should be useful to both traditional and critical, religious and not-religious, readers.

Friedman is an eminent scholar, widely published; his coauthor, Dolanksy, is the author of a book on magic and religion in the Hebrew Bible. When they talk about the Bible, they explain at the outset, they mean exclusively the Hebrew Bible,

because that is the area of our expertise. We have had the experience of people asking us all sorts of questions about matters that lie outside our area of expertise: about the New Testament, about rabbinic Jewish texts, and much more. Don't go to a gynecologist for a broken leg.

That's disarming. How does it play out?

You can get a pretty good idea from the first chapter, on homosexuality. An oft-cited verse from Leviticus (20:13) says that men who participate in homosexual intercourse shall be put to death. Friedman and Dolansky's treatment of this verse is learned, lengthy (though not tedious), ingenious, and complex. A key point, for instance, is a distinction they make between an act that is "offensive" to someone and an act that "is wrong in itself and can never be otherwise." They claim that a technical term in the verse in question has the former meaning, not the latter. "So," they conclude,

whatever position one takes on this matter, Left or Right, conservative or liberal, one should acknowledge that the law really does forbid homosexual sex—between males but not between females. And one should recognize that the biblical prohibition is not one that is eternal and unchanging. The prohibition in the Bible applies only so long as male homosexual acts are perceived to be offensive.

Here and elsewhere, the authors fulfill a promise made in the preface—that in "every chapter we expect to bring something that you have not already heard a hundred times: either new texts or new perspectives or new evidence." But is the result a better understanding of the biblical text, or is the meaning of the text obscured? And is their "method" genuinely even-handed and unbiased?

Recall for a moment the authors' explanation that they are just going to stick to their area of expertise. What this entails, in practice, is citing evidence from a wide range of radically different religio-socio-political settings while ignoring not only New Testament texts (written by authors rather familiar with Jewish culture and living on the bookend of the Old Testament's time of composition) but also Jewish sources from the first two centuries of the Common Era. Friedman and Dolansky draw on ancient sources from pagan cultures across the Aegean; furthermore, many of these comparative sources are a millennium earlier.

In their treatment of abortion, Friedman and Dolansky expend considerable energy contrasting usage of the Hebrew mwt (killing) with rsh (murder), arguing that readers cannot use Scripture to show that abortion is intentional homicide. But today we might easily say "he killed a man and is serving time" (instead of "murdered a man") without fear of being misunderstood. In their discussion of the miscarriage case (Ex. 21:22-25), in which fighters strike a pregnant woman—prima facie a lex taliones scenario, including "a life for a life"—the authors discount the likelihood that the passage is concerned at all with the death of the baby, inside or outside the womb.

Friedman and Dolansky say that the passage in Exodus is about "accidental miscarriage" and "unintended consequences" (to the mother). Full disclosure: this gets a bit personal for me. My wife became a widow when a teenage football player slugged her unsuspecting husband, a passerby, at a Toledo dock next to their yacht. Her husband fell unconscious into the bay and drowned on Father's Day eve, with three boys ages five and under. "Involuntary manslaughter" was the 17-year-old's verdict, not "murder." The verdict was correct, but that young man was nevertheless responsible for taking an innocent life. That's the bottom line.

When they align supporting ancient sources for their position on abortion, starting with the Ebers Papyrus (c. 1550-1500 BCE), Friedman and Dolansky note that "Middle Assyrian Law is the only ancient law code that prescribes a penalty for a woman who has a 'miscarriage by her own act.' In other words, the Middle Assyrian code actually contains a law against abortion." Once again, their methodology is a bit perplexing. The "only" ancient law code they cite is from the same group of laws that, in other places in their book, is given considerable weight in the argument. Is not this "one" endorsement of abortion a rather significant find in light of the paucity of texts from this era? We only have one discovery of Scripture predating the Dead Sea Scrolls, the apotropaic silver amulets found by my former professor, Gabriel Barkay (1979, Book of Numbers). However, these portions of the Priestly Blessing found at Ketef Hinnom speak volumes.

Perspective indeed reigns supreme in The Bible Now. This was underscored for me when I came to the afterword. Again, the authors' tone is genial. "You do not have to agree with everything here," Friedman and Dolansky begin, and they recall "the pleasure of exchanging thoughts (and arguments) with our friend Mary Douglas," the distinguished anthropologist (and devout Catholic) who, near the end of her life, produced provocative studies of Leviticus and Numbers. "We do not mean that biblical scholars are the only ones who can contribute to understanding the Bible," they write. "We know of wonderful contributions from non-biblical scholars, whose insights have been felt far afield from biblical studies. We have especial appreciation for some of Freud's insights." What? Surely they are not referring to Freud's pseudo-historical Moses and Monotheism? Alas, they are. Perhaps such a standard for "wonderful contributions" and valuable "insights" helps explain my frustrations with The Bible Now.

This is one of those reviews that I wish I had more knowledge about. But what I think is instructive is that the one source they cite on abortion comes for a very smilar culture. The defense of abortion is something that I have found only in the last half century opf our culture