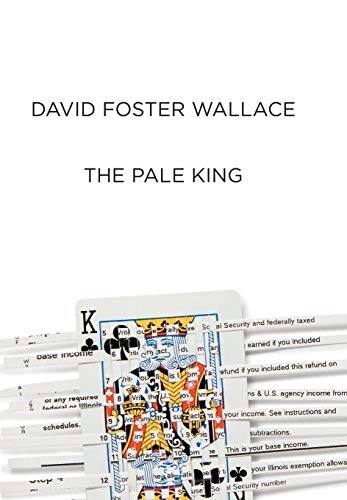 [Editor's note: This is the first of several pieces we will be running occasioned by the publication of The Pale King, an unfinished novel by David Foster Wallace, who committed suicide in September 2008. See also Joseph Bottum on Fate, Time, and Language, Wallace's undergraduate thesis.]

Honest appraisal of The Pale King is a tactical nightmare. You vacillate between reading it as David Foster Wallace's latest book and as his last. For several chapters running, you may manage, rather callously, to ignore Wallace's 2008 suicide, his decades of depression, his grieving widow and friends; recoiling, then, from such heights of New Critical stoicism, you promptly find yourself reading an intelligently conceived office comedy as a suicide note. An underdeveloped chapter sends you into a rage—the ill-informed, finally presumptuous anger of the healthy to the suicide—while a beautiful one evokes, worst of all, the dreadful cliché He was just too sensitive for this world. We have long been in the habit of treating artistic suicide as a gesture of final surrender to the world's bedazzlements, as the thorniest of thorny late works. But suicide is not a gesture. Life is not art.

It has always been unusually hard to separate Wallace's art from the nimbus of reputation surrounding it, from the stories foisted upon his career by those who love reading and by those who don't. He was the Maximalist who would succeed last season's Minimalists; the next term in the set {Barth, Coover, Gaddis, Gass … }; the spirit of the early 1990s on horseback, shambling and disheveled. If your acquaintance with Wallace extended only as far as his famous magazine pieces, these reputations seemed accurate enough. Wallace the journalist follows a fairly simple formula—turn on the nervously loquacious charm, submit to a cultural experience, and stick footnotes all over it. After a great chatty expenditure of energy, he lurches to the safety of truism: porn is creepy, boiling lobsters is mean. His celebrated profile of John McCain actually uses the word "maverick." At worst, these pieces are precisely of our moment; the reader, like someone idling on the Internet, moves sloppily back and forth between one slab of text and another (those famous footnotes again), absorbing worlds of information and pop-culture reference, emerging at the end of the afternoon with little she didn't, in some fashion, already know.

Many champions of Wallace the journalist stop short at Wallace the fictionist, and this has given his real work a false reputation for difficulty or (the lazy reader's catchall term) "self-indulgence." For an avant-garde writer, he is surprisingly easy. He is not misanthropic, like Gass, or arch, like Bernhard, or high, like Pynchon. Where Joyce and Pound send us multiple times per sentence to the dictionary, replicating in English the feeling of studying Latin with the Jesuits or teaching yourself Provencal in a hired room, Wallace positively delights in explanation; he is touchingly eager to guide, clarify, apologize, or concede. His use of occupational jargon mimics Tolstoy's use of French, least clear where it is least essential. If he frustrates our desire for clear plot or forward momentum, if he forays into higher math or finance or thermodynamics, context often clarifies his allusions, and a little patience reveals why, and for the sake of what compensating pleasures, he has bogged us down.

The eerie diptych "Sex World (I)" and "(II)," from Brief Interviews with Hideous Men, is exemplary: A young woman marries a man who is sexually attentive, adept, and generous. Too generous—having satisfied her, he rolls over and goes to sleep. Investigation discloses that he is a rabid onanist—and thus far "Sex World (I)." At this point, instead of continuing the story (the woman secretly follows her husband to a sex shop; she spies on him; she must decide what to do), Wallace confronts us with a baffling series of schematics, digressions, section breakdowns, and other straight-from-the-notebook sentences, all of which "take us out of the story." But they substitute for the stylistic proficiency of section one the stranger intimacy that subsists between the artist and his creations—that is, in a way, they take us deeper into the story. And they reveal Wallace's fear that the mimetic proficiency of "Sex World (I)"—the pileup of verisimilar details, the expert mimicking of the woman's interior monologue, etc.—all make him like the story's selfish husband, perfectly skilled, and perfectly hidden behind his skills. The "interruption" of "Sex World (II)" thus in fact deepens, extends, and echoes the story's themes in ways not available to other narrative methods; and when Wallace at last resumes something like conventional narration, he has already reminded us that the issues at stake in the story are playing out now, between himself and us, and possibly between ourselves and others. Instead of making us sympathize, he forces us to self-examine.

This turns out to be the real source of his difficulty: he is morally demanding. He wants us, for starters, to sympathize with everybody: addicts, oversharers, psychotics, the severely disfigured. He is often a very funny writer, but his satire is apt to turn pathetic just at the point when other writers would indulge a climactic laugh at someone's expense. And because character is most often revealed in our standing-around moments, not in Aristotelian catharses that may happen once or twice a lifetime, he writes in monologues and setpieces, long descriptive passages that emphasize certain themes but reach no resolution—crescendo in the musician's, not the journalist's, sense. It is up to you to notice the reassertion of themes from one to the next. Worst of all, he creates bright, magnetic personalities and shows the hollow core of self-seeking at the heart of likability, then asks that we love them. Neal, the suicidal narrator of "Good Old Neon," tells us:

There was a basic logical paradox that I called the "fraudulence paradox" that I had discovered more or less on my own while taking a mathematical logic course in school …. The fraudulence paradox was that the more time and effort you put into trying to appear impressive or attractive to other people, the less impressive or attractive you felt inside—you were a fraud. And the more of a fraud you felt like, the harder you tried to convey an impressive or likable image of yourself so that other people wouldn't find out what a hollow, fraudulent person you really were. Logically, you would think that the moment a supposedly intelligent nineteen-year-old became aware of this paradox, he'd stop being a fraud and just settle for being himself (whatever that was) …. But here was the other, higher-order paradox, which didn't even have a form or name—I didn't, I couldn't.

The sense of suffocation that such passages induce in readers is often blamed on sentence length—on, again, "self-indulgence." But in fact, to read Wallace, especially the dense minor-key stories that followed Infinite Jest, is to feel caught out, diagnosed. It's a bit like reading Kierkegaard. Or Galatians.

After his death, all of these traits became easier to notice, and they in turn became part of a new, more flattering, no less confining narrative: Saint Wallace, the Solzhenitsyn of Silicon Valley. He is now the writer who detected, years before anyone spoke of "internet addiction," the narcotic quality of American entertainment. And he proposed that we shift our attention from our Crackberries to the "myriad petty little unsexy" kindnesses of a mundane life. He recommended that people look into the world's great religions for help.

This turn in reputation comes closer to giving Wallace his due, but it has complicated the task of making sense of The Pale King. If Infinite Jest, with its Ringu-style killer videotape and its happy addicts, had been his diagnosis of an entertainment culture, this novel, as is widely known, was to have been his prescription to it. By studying IRS employees in central Illinois—drab jobs in a drab landscape—Wallace would figure out, for us and for himself, how to attend, how to stay awake. The novel would do for us what St. Anthony did for the early Middle Ages.

The book's promise is so vast, the end of Wallace's life so dire, that the temptation is overwhelming simply to pronounce the book a masterpiece and start pouring the Gatorade. But The Pale King is not even a piece. Nobody knows what the finished book might have looked like. The version we have, carefully assembled by Wallace's longtime editor Michael Pietsch, apes Infinite Jest: a series of monologues, dialogues, and descriptive performances through which moments in the development of various plots and ideas can be glimpsed. In Infinite Jest, all of these pay off—a character shows up, six hundred pages later, looking remarkably and movingly different; the differences tell you everything you need to know. But this organizational scheme only works if the book is finished. Otherwise it's like looking at a collection of time-lapse pictures from which most of the images have been removed at random. Where some unfinished novels offer well-constructed, going-somewhere scenes, The Pale King gives us snapshots so random we don't always know what we're looking at. Certain characters recur—the evangelical Christian Lane Dean, the pathologically nice Leonard Stecyk, the "fact psychic" Claude Sylvanshine (he constantly intuits pieces of random, useless information from the world around him)—but it's not yet clear what configurations Wallace meant to put them in. A troubled young woman lurks around the book's beginning and end, plotting mischief, but we don't know why, or what she has to do with anything. There is also a subplot involving David Wallace himself, suggesting that the book might have become a parody- or anti-memoir about Wallace's (nonexistent) years with the IRS in the mid-1980s. Parts of the book are startlingly well-developed and have already stood on their own as sketchlike short stories. A few chapters are distractingly bad.

On reflection, the book begins to look less unfinished than abandoned. For all his loquaciousness, Wallace hated to repeat himself. Having made the Infinite Jest model work once, he was not likely to use it again for a work so different in execution. Wallace's best post-Infinite Jest work was "Good Old Neon"—collapsed where the novel had been diffusive, a steady, unflinching examination of one moment rather than a collection of vignettes. The best sections of The Pale King have this story's intensity; the worst sections are the ones that try to mimic Infinite Jest's scattered, farmed-out methods of character development. The novel's ideal form may have been as a single, dense 160-page paragraph.

All this sounds like a discommendation. Actually, The Pale King has treasures aplenty if we take the book as a sort of miscellany, if we put The Castle and The Aeneid and Time Regained out of our heads as we read it and think instead of Advertisements for Myself, The Crack-Up, or Psychotic Reactions and Carburetor Dung. Like them, The Pale King is a compendium of local victories, outlines, back-of-the-napkin notes. Wonderful sentences are everywhere—I would personally dig through all its rubble again just to reach the moment when Wallace compares the Illinois sky to "motel ice." He ranks with Marilynne Robinson and David Rhodes in his ability to describe midwestern landscapes. The book does not satisfy; it does not even finish setting the terms on which it may once have hoped to do so. But does it inspire, intrigue, and provoke? Absolutely. And in this way, at least, it is a fitting addition to the oeuvre of David Foster Wallace.

Philip Christman holds an MFA in Fiction from the University of South Carolina and an MA in literature from Marquette University. He teaches writing at North Carolina Central University.