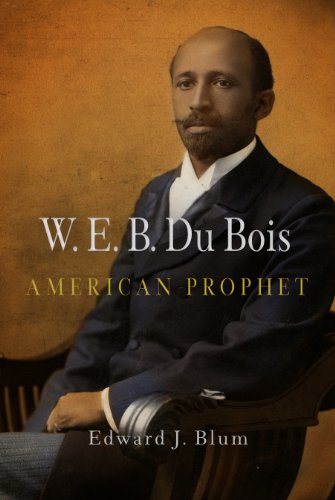 Students of U.S. religious history will be well-served by reading Blum's book, returning to their classrooms with his infectious, admiring passion as a touchstone for their lessons on The Souls of Black Folk, a book long anthologized and used in undergraduate religious studies classrooms to convey a certain profile of African American religiosity. Moreover, Blum's portrait of Du Bois usefully maps onto other pictures of religious critics, like William James and Felix Adler, who share Du Bois' mesh of social science and visionary epistemology. Yet perhaps Blum's most important contribution is not a religious remapping for Du Bois but rather an academic reimagining of religious biography. A myopic modernism has informed a generation of Du Bois biographers. Blum's accomplishment is to lasso a widely scattered body of evidence showing that when it comes to religion, biographers of Du Bois (and, we fear, others) are routinely tone-deaf to subjects sacred. May Blum's biography stand as the necessary rejoinder, inspiring future writers to find ways between the drily agnostic and the inevitably sacrosanct Du Bois. "His plans for a new world were spiritual plans," Blum writes of Du Bois. It is for future writers, and dogmatic believers, to translate those plans from the genius of the written page to the real of the political now.